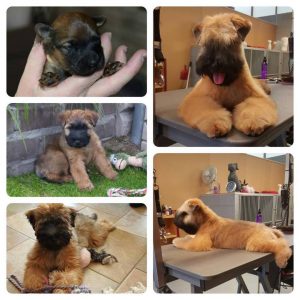 Our first wheaten is called Oreana  ~ Only the Best From Kizzy’s Paradise. Oreana is out the 1e combination: Poirot and Bobientje (see pedigree). Born on April 18, 2015. Oreana is very sweet, playful and happy and alert. Oreana got in May’17 her first litter, 5 males and 2 females, In September ’18 she got 3 males and 2 females. All have found there golden basket . In the beginning of September she will be expecting her second litter (see Puppies). Also won she many prizes at the dog shows and champion titles. Oreana is a International Multi Champion, in the Netherlands, Belgium, Croatian and Switzerland. And she is 2 years in a row selected for the Crufts 2017 & 2018 and as International Champion for life selected!! Oreana is in the Wheaten Top 10, from our Breed Association “De Wheatens”, where she won 3th place in 2016 and in 2017 she became 6th place with only 4 shows!! 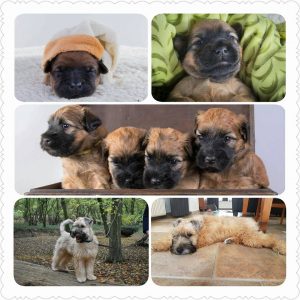 Our 2nd wheaten is called Paige ~  P.S. I Love You From Kizzy’s Paradise. Paige is out the 2e litter combination: Poirot & Bobientje (see pedigree). Born on June 11, 2016. Paige is growing up from a puppy to a beautiful and very sweet wheaten. Alert and loves to play in the garden and on the swing. From the third weekend of November ’16 Paige makes her debut in the dog show world and got many lovely words from the judges and she became already a Multi champion, in the Netherlands, Belgium and Switzerland, so now we hope she gonna be a “Adult” Champion in the future!! She also was qualified 3 time for the Crufts 2018. And in the Wheaten Top 10, from our Breed Association “De Wheatens”, she won 1e place and that is amazing because she still was a youth dog in 2017!! Paige became in May’18 Luxembourg Champion at the age of 22 months old. Paige is a International Champion. 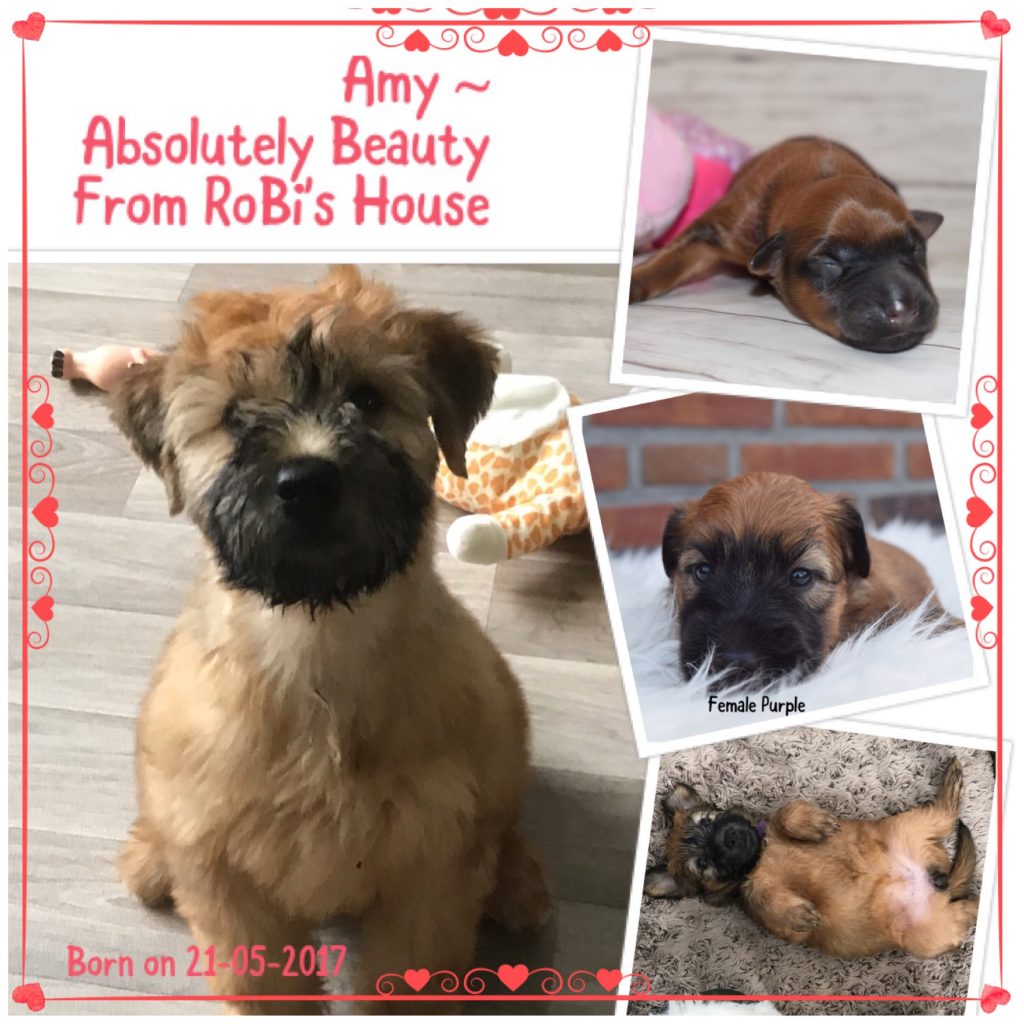 Our 3rd wheaten is called Amy ~ Absolutely Beauty From RoBi’s House. Amy is a female from our very first A-litter out  the combination of Nelson and Oreana (see pedigree). Born on May 21, 2017. Amy is still a pup, but very eager to learn, watchful and alert with her mother Oreana and Aunt Paige who both are a great example to her. In the second weekend of September ’17 Amy she made her entrance in the show world! And was immediately awarded BOB-Minor Puppy and they are expected to have a golden future, the words of the judge (s).Already won a couple Crufts Qualifications for 2019. In April ’18 became Amy Luxemburgs Youth Champion at the age of 10 months old. Amy is a Multi Youth Champion. She is a multi Youth Champion. If everything goes well then she will be having at the end of August her first litter. 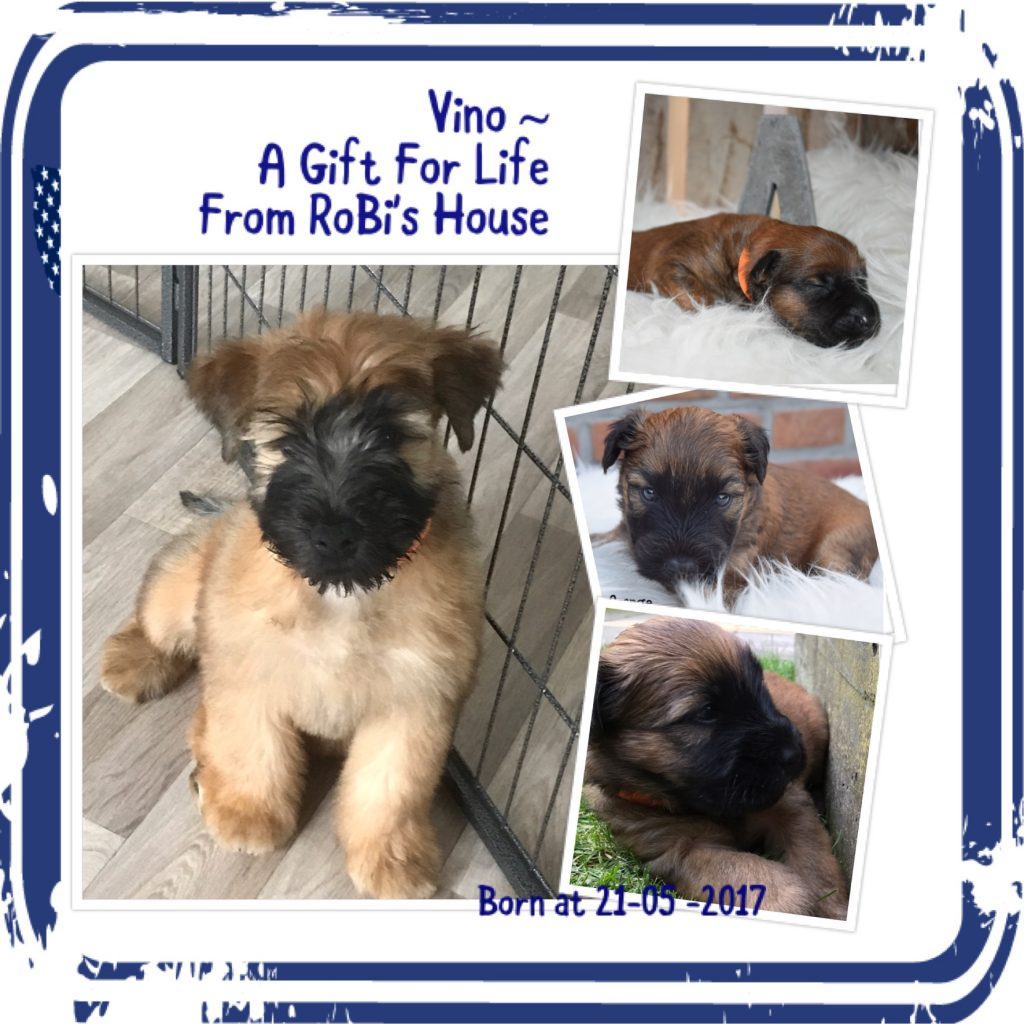 Our 4th wheaten is called Vino ~ A Gift For Life From RoBi’s House. Vino is a male from our very first A-Litter out the combination: Nelson & Oreana (see pedigree). Born on May 21, 2017. Vino is now also as puppy with a very sweet and calm character. From the 2e weekend of Septermber’17, Vino has made his entrance into the dogshow world! He got a great future ahead according the judges. And is already many times awarded with BOB Minor Puppy and BOB Puppy and during the Amsterdam Winner 2017 Vino became 2nd Best In Show Puppy in the main ring of honor! So we are wondering what the future will bring for him!!  In May ’18 Vino became Luxembourgs Youth Champion at the age of 11 months old. And Vino is a Multi Youth Champion. He also had several health screenings done (see health screenings for the results).